I am watching my son, eleven-and-a-bit years, eat his lunch.

He has the same meal every day—oven chips, carrot and chicken. He takes comfort in the familiar—needs it, like he needs oxygen.

He is using both a fork and a knife.

More than that—he is using ordinary cutlery. He no longer needs specially shaped knives, forks and spoons that are shaped to make it easier to lift food from plate to mouth.

Taken from the cutlery drawer without a thought and slipped quietly next to plates and bowls.

He still won’t touch food with his bare hands, but this? This one we’ve conquered—the sweet result of years and years of working intensely on a simple skill.

My son is autistic. He also has dyspraxia. Simple instructions such as co-ordinating a knife and a fork at the same time, get lost in the conflicting messages between his neurological system and his muscles.

At least, it used to. Forks and knives and hands and mouth, now listen to his brain.

Dyspraxia impacts his life in hundreds of ways, but we have worked so hard.

Giving up, has never been an option.

We don’t know the meaning of those words.

There have been lots of tears.

Mine and his, and we are intimately familiar with frustration.

So, here we are, the two of us, on a quiet Thursday afternoon. It is raining outside, I am having a cup of tea and I am watching my boy eat his lunch with a knife and a fork, and it is an utterly beautiful thing.

A little glimpse into life in my home and the sweetness of simple things that are hard won. 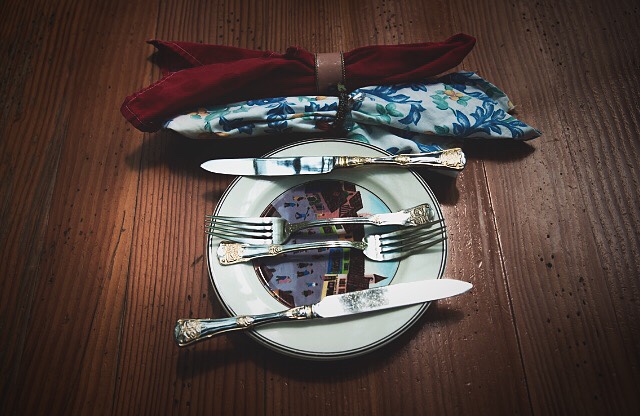 my eyes find hers. . i say, . one more push! . you’re almost there. . as women have done for years . since time began, and . suddenly! . a rush of life. . my hands hold . hope, . slick with blood. . i wipe nose and mouth, look for tiny breaths, a whisper on my hands. . she cries. . i smile, but still . no words fall from my tongue. . not yet. . eyes wide with wonder, . he looks at me, i nod . and . there beside the bed, a new-born father . finds, . perfectly folded, . his daughter’s tiny ear, . bends down holy, . softly whispers ancient words filled with God. . — adhaan . © Liezel Graham 2020. . Photograph by Charles Deluvio. . I shared this poem in my writing group this morning and I thought I would share it with all of you over here, too. . The Adhaan (Adhan) is the Muslim call to prayer which a father whispers into the right ear of his newborn baby as soon as possible after birth. . I once delivered a lovely Muslim couple’s first baby and this was an incredibly beautiful rite to witness. . liezel . . . #poetry #poetrycommunity #poetrylovers #poetsofinstagram #indiepoetry #indiepoet #words #wordsmith #poetryisnotdead #poetryporn #spilledink #spilledthoughts #iweepinink #liezelgraham #birth #adhaan #adhan #calltoprayer #faith #midwife #holywords #sacredintheordinary #beautyintheordinary #holymoment #newborn
It’s cold and exceedingly wet in Glasgow today, but I am warm, sitting in a corner of a coffee shop, and I am chasing a poem. . ...and, the barista knows his stuff. . . . #amwriting #amwritingpoetry #coffeelover #writing #poetry #glasgow #poetry #poetsofinstagram #indiepoetry #indiepoet #poetryporn #liezelgraham #words #wordsmith #creativity #chasingcreativity
i want to return to you at the end of a day’s wandering. . my hands filled with feathers from the lemon soft of a blue tit’s chest. . do you remember its song? . and seaglass, smooth like the inside of my wrist as it turns away from the sun, . to face you. . you are freedom and you are an anchor. . a map to the world and the way back. . i want to return to you, over and over, at the end of my wandering. . my hands filled with secrets and love. . — i want to return to you. . © Liezel Graham 2020. . Photograph by Simon Migaj. . . . . #liezelgrahamwriter #poetry #poetsofig #poetsofinstagram #words #wordsmith #liezelgraham #iweepinink #spilledink #spilledthoughts #poetrylovers #poetryisnotdead #poetryporn #indiepoetry #indiepoet #relationship #love #lovepoetry #scotland #beautyintheordinary
courage fits everyone differently. do you know how beautiful brave looks on you? . . © Liezel Graham 2020. . . Photograph by Jon Tyson. . . . . Don’t compare your place of courage to that of another. . Courage looks different on each of us. . Vulnerability looks different on each of us. . Do you know how beautiful brave looks on you? . . . #liezelgrahamwriter #liezelgraham #encouragement #brave #courage #vulnerability #qotd #quoteoftheday #quotestoliveby #poetryporn #spilledink #spilledinkpoetry #spilledthoughts #iweepinink #words #wordsmith #livemoremagic #livereal #poetsofinstagram #bravelookslikeyou #scotland